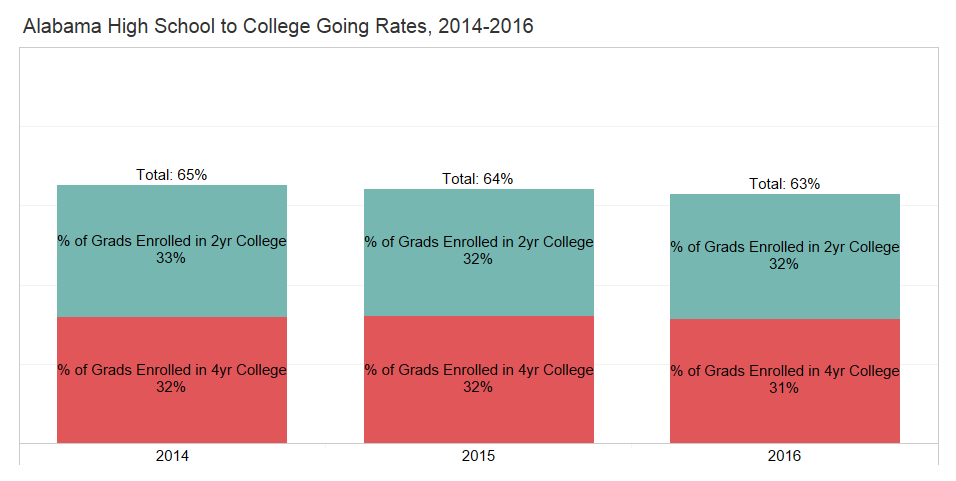 That’s according to new data released by the Alabama Commission on High Education (ACHE). The data from the report is drawn from the National Student Clearinghouse, which tracks student entry and progress through higher education. College-going rates and college destination statistics for the state, for systems and for individual Alabama high schools can be found on PARCA’s Data Dashboard.

The findings in the most recent report are similar to patterns identified in another recently released dataset from ACHE, its high school feedback report. PARCA’s analysis of that data shows that though a slightly lower percentage of graduates are enrolling in higher education, those enrolling appear to be better prepared since a smaller percentage of those enrolled students are placed in remedial education after graduation.

Where are we now?

Alabama trails most U.S. states when it comes to educational attainment, with a smaller percentage of Alabama’s population aged 25-64 holding a college degree. Higher levels of educational attainment produce higher incomes and more job stability in an economy which increasingly demands education beyond high school. To close the gap with other states, Alabama needs a greater share of its population obtaining higher education credentials. But, according to the most recent comparative data, Alabama trails the national average and lags behind all other Southeastern states in the percentage of high school graduates going directly into college.

According to the new ACHE data, approximately 63 percent of Alabama high school graduates are enrolling in college the year after graduating from high school:

Of those Alabama high school graduates enrolling in higher education:

A deeper dive in the data shows how diverse the state’s educational eco-system is. Across the state, systems vary widely in the percentage of graduates who go on to higher education. Some patterns are predictable: affluent suburban districts tend to send most of their graduates to college at four-year colleges and universities. In general, high schools where more students are affluent have a greater share of students going on to higher education. In schools where poverty rates are higher, a smaller share of students go on to higher education (See this chart that compares college-going rates with the proportion of poverty students at a high school). However, a greater variance appears when the percentage of students going to two-year colleges is considered in the mix.

More unexpected is the system that finished third on the college-going list. Brewton City Schools also had an impressive college-going rate of 85 percent, but the destination of Brewton’s graduates was different from Mountain Brook’s. In that system, 48 percent of graduates enrolled in a two-year college, while 37 percent went to four-year schools.

Those varying paths toward achieving a high college-going rate continue throughout the rankings.

Variance by High Schools and Within Systems

In some systems, there is a significant variance among the high schools within the same school system. This is particularly true in systems that have magnet high schools (schools where students from throughout the district can apply to pursue advanced academic options).

This is most readily apparent in Montgomery County. Three magnet high schools in the Montgomery County system, Brewbaker Technology Magnet High School, Loveless Academic Magnet Program, and Booker T. Washington Magnet High Schools rank in the top 10 among high schools for the percentage of students enrolling in college the year after graduation. All three send close to 90 percent or more of their graduates to college, and most of them to four-year schools. By contrast, of the 2016 graduates of Lanier Senior High School, only 34 percent enrolled in higher education, according to the Clearinghouse data.

Where do we want to go?

In terms of national comparisons, Alabama has historically ranked low in educational attainment. The U.S. Census Bureau estimates 34 percent of Alabama’s population between the ages of 25 and 64 have an associate’s degree or higher. That ranks Alabama 9th lowest among U.S. states.

Colleges and universities need to:

What issues most concern Alabamians? What options do policy makers have to address these issues? These are the questions behind Alabama Priorities – a new initiative of the Public Affairs Research Council of Alabama. We unveiled the initiative at PARCA’s 2018 Annual Meeting last Friday. The presentation can be viewed here.

In partnership with Samford University, PARCA conducted an open-ended survey of Alabama-based academics, journalists, and civic, business, and nonprofit leaders to create a list of the most serious issues facing Alabama in 2018. More than 150 experts participated, producing a list of 17 issues.

With issues identified, PARCA again collaborated with Samford University to design a random digit dial telephone (50% landline and 50% mobile) survey of registered voters. The poll was conducted by the USA Polling Group at the University of South Alabama in December 2017. The survey collected 468 responses with a margin of error of 4.5%. Responses were weighted for race, gender, education, and age. Below are the top ten issue determined by Alabama voters.

Step 3: Reveal Alabama Priorities
PARCA revealed the 10 priorities, as ranked by Alabama voters, at its 2018 Annual Meeting: The 21st Century Governor, on February 2, 2018. A full report and analysis of the data is forthcoming.

PARCA will publish a series of policy briefs on each of the top ten priorities in the weeks leading to the general election in November 2018. The briefs will be short, easy-to-understand, nonpartisan descriptions of the priority and will answer four questions.

What is the issue?

Why does it matter?

How does Alabama compare?

What options does Alabama have?