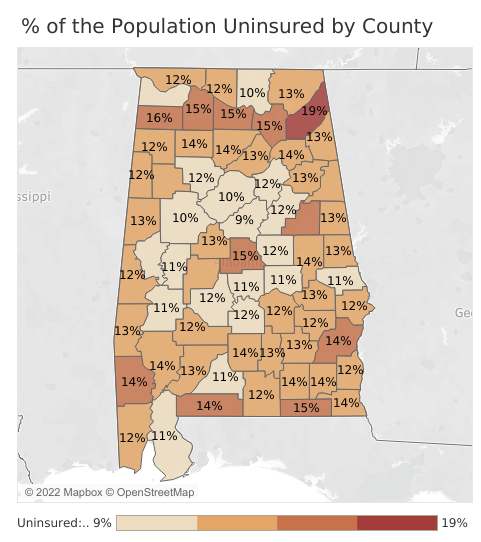 Nationally, the uninsured rate declined from 10.8% to 10.4%. Alabama ranks 39th among the states in the percentage of its population with health insurance.

The latest estimates come from the Census Bureau’s Small Area Health Insurance Estimates (SAHIE). The Bureau has built an interactive tool for exploring the data in depth at the national, state, and county levels.

With the implementation of the Affordable Care Act in 2014, Americans gained access to health care exchanges and subsidies, which increased the percentage of people with health insurance. The law also encouraged states to expand Medicaid eligibility in order to provide health insurance to more low-income individuals. To date, 12 states, including Alabama and several other Southeastern states, chose not to expand Medicaid. Those states tend to have higher percentages of their population uninsured.

Three Southeastern states did expand Medicaid eligibility. Those states have a smaller percentage of the population uninsured than Alabama: Kentucky, 6.9%; Louisiana, 9.6%; and Arkansas, 10.2%.

Dekalb County has the highest percentage of the population without insurance, at 19%. Dekalb and other counties across North Alabama have a greater share of residents who are Hispanic compared to other parts of Alabama. Nationally, the health insurance rate is much lower among Hispanics than in other demographic groups. On the other end of the spectrum is Shelby County, which has the lowest percentage without insurance, 9.3%

Coverage For Children: A Bright Spot for Alabama

Alabama ranks in the top 20 when it comes to providing health insurance to children. Only 3.6% of individuals 18 and younger lack health insurance, largely thanks to the ALL Kids, Alabama’s Children’s Health Insurance Program (CHIP). The program is administered by the Alabama Department of Public Health and Blue Cross Blue Shield of Alabama (BCBSAL) to provide medical, mental health, and substance abuse services through their preferred provider organizations (PPO).

Alabama has policy options for decreasing the number of people who lack health insurance. Recent federal legislation has provided additional incentives to expand Medicaid. An analysis by PARCA and the Center for Economic Development and Business Research at Jacksonville State University found that expanding Medicaid coverage to low-income adults in Alabama would actually save the state almost $400 million per year over the next six years. Much of that savings would come through having federally supported Medicaid coverage pay health care costs that are currently paid for by other state programs. Expansion can be handled by expanding coverage under the government program or a through insurance policies subsidized by Medicaid funding but offered by private companies. 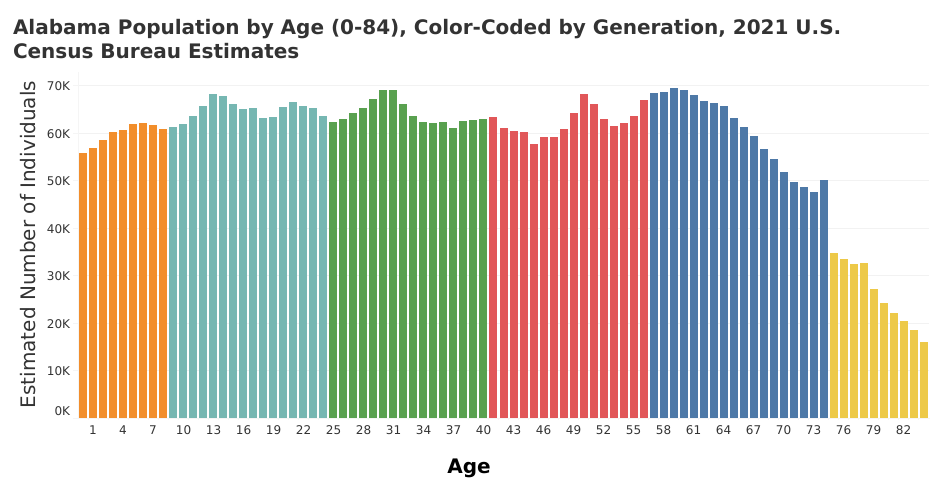 Absent immigration from other states or from abroad, Alabama’s working-age population is on track to shrink in coming years, according to a PARCA analysis of new population estimates from the U.S. Census Bureau.

(Not represented in the graphic are the more than 85,000 Alabamians the Census estimates included in the 85 and older category).

The 2021 Census population estimates by age provide a preview of the number of individuals that will join the workforce and the number that will likely be leaving it. Two factors are conspiring to create downward pressure on the working-age population:

In every successive year thereafter, the number of Boomers exceeds the corresponding Generation Z cohort.

The gap widens significantly when today’s 11 and 12 years reach the age of 18. In 2008, with the advent of the Great Recession, birth rates fell. And they haven’t recovered.

Even when the Baby Boom has moved out of the prime working years, the number of potential leavers will outnumber new entrants, based on the current age structure of the Alabama population.

Considering only the current population, over the next 18 years, Alabama’s population between the ages of 18 and 64 will drop by a cumulative total of more than 50,000.

However, current residents only make up part of the story. Population growth is also influenced by migration and birth and death rates. Labor force supply is also affected by migration, by labor force participation, and indirectly by educational and skills attainment.

In terms of the natural population increase, Alabama has already seen two successive years in which deaths exceeded births. In 2021, about 8,500 more people died than were born, according to the estimates. This is due to the larger number of people moving into old age and the elevated death rates associated with the Covid-19 pandemic.

In terms of migration, changing patterns are affecting population and labor supply. From 2010-2016, most of Alabama’s population growth came through international immigration, with the state annually adding about 10,000 new residents who had been born abroad.

In recent years, Alabama has enjoyed a net positive inflow of residents from other states, about 20,000 new residents a year from that source.

With unemployment low and demand for workers high, Alabama may continue to attract new residents through migration. But at the same time, the state is trying to increase the quality and the quantity of Alabama’s homegrown labor force:

An array of state initiatives are underway to improve student preparation:

On the labor force participation front, through the Success Plus Initiative, the Alabama Workforce Council, the Governor’s Office, and an array of state agencies and participating nonprofits are collaborating on strategies to bring more people into the workforce training and education systems. The initiative seeks to address barriers individuals face to participating in the workforce and training. Through cooperation and outreach, the partners hope to reach discouraged workers and provide them pathways to high-demand fields.