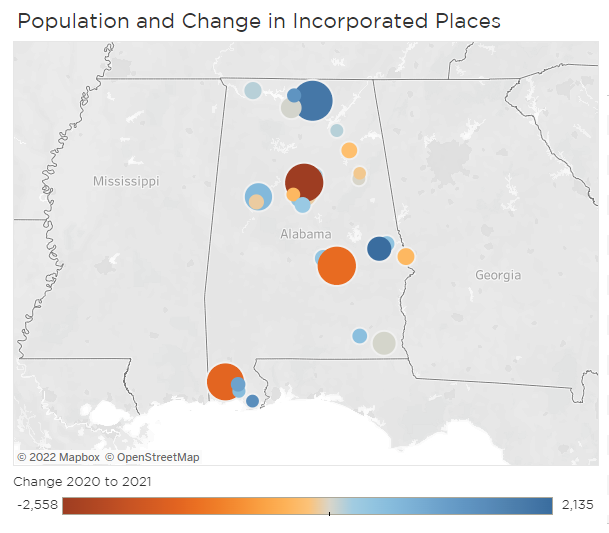 During this period, international migration was effectively shut off. The influx of new residents from overseas had been a primary driver of population gain in the larger established cities. Meanwhile, this period also saw elevated mortality rates due to the pandemic. Also, due to the pandemic, cities across the nation saw an outflow of residents as businesses stayed shuttered and workers were asked to work from home.

Huntsville bucked the trend of large city population loss, adding 1,920 residents according to the estimates. Only Auburn added more, 2,135, which was more population gain than any other Alabama city. Since 2010, Auburn’s population has increased 43%, the fastest rate of growth among cities over 20,000. Neighboring Opelika has also grown, adding an estimated 465 in 2021.

Both Auburn and Huntsville have been spreading out through annexation, adding undeveloped land where housing is now being built. At 218 square miles, Huntsville is now far larger than Birmingham at 147 square miles.

Add up the growth totals in Baldwin County, and you’ll see why the coastal county is No. 1 in numeric growth among Alabama counties. The estimates show Foley adding nearly 1,500 residents, Daphne more than 1,000, and Fairhope and Gulf Shores over 500 apiece.

The Birmingham-Hoover metropolitan area is still far larger than the next largest metro, Huntsville, with around 500,000 residents compared to Birmingham-Hoover’s 1.1 million. Over the past two decades, population growth around Birmingham has occurred chiefly in its suburbs.

However, according to the 2021 estimates, some traditional growth engines were idling. Trussville only added 172 new residents, and Hoover saw a net decrease of 98 residents. Homewood, Mountain Brook, and Vestavia Hills saw population declines. A bright spot for Jefferson County was Gardendale which posted a gain of 407. The growth in the Birmingham MSA occurred farther out in Shelby and St. Clair County. Calera added 742 residents; Chelsea, 478; and Helena, 465. Pell City, Moody, and Margaret town in St. Clair County also added residents. Nearby, Tuscaloosa added 658 residents and broke over the 100,000 population mark, coming in at 100,618.

Across a region, the biggest population gains were in north Alabama. In addition to Huntsville’s growth, Athens, in Limestone County, added over 1,300, and the City of Madison almost 1,000. Nearby, The Shoals added 424 residents, with growth in both Florence and Muscle Shoals continuing a positive trend. Across the entire northern tier of the state, almost all the cities and towns showed growth.

Anniston and Gadsden, however, continued a flat to declining population trend.

More broadly, most cities and towns in rural Alabama, from Northwest Alabama, through the Black Belt, and East Central Alabama, lost population.