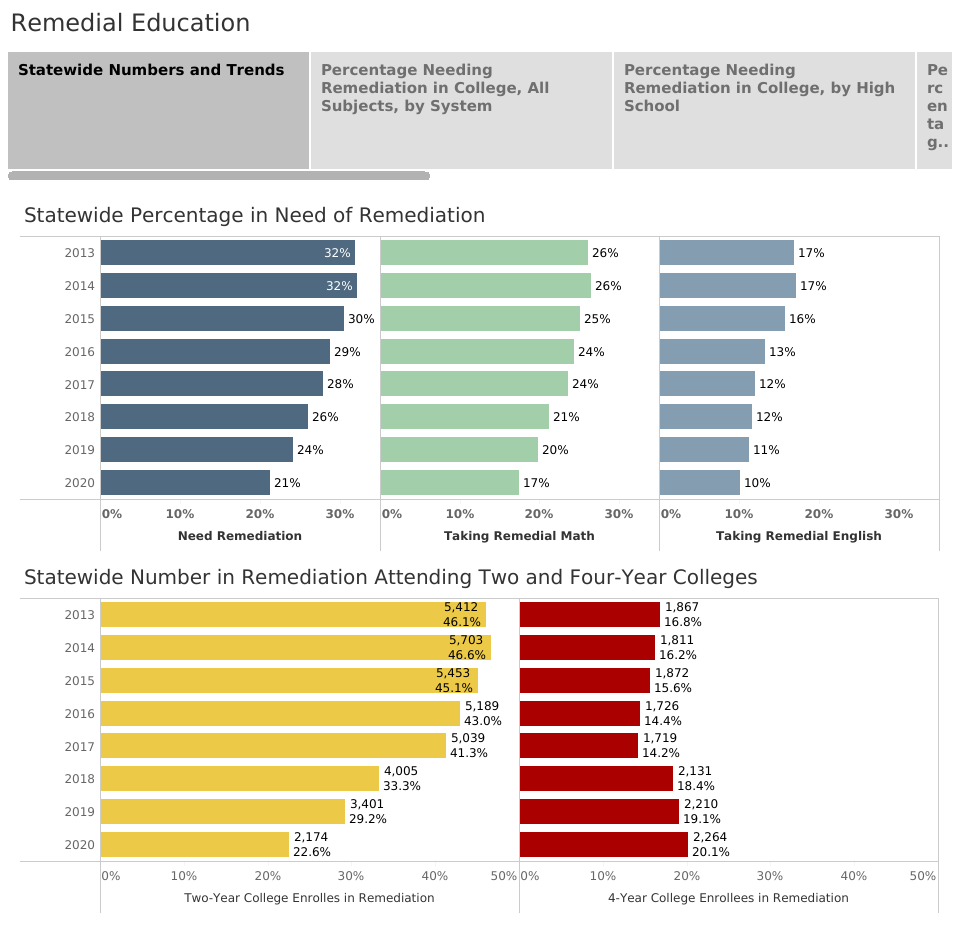 Despite the disruptions of the pandemic, Alabama high school graduates who entered college in 2020 were less likely to be assigned to remedial education and thus should be in a better position to succeed in college. The new figures released by the Alabama Commission on Higher Education (ACHE) show a continued decline in the number and percentage of students taking remedial classes in their first year, particularly among those entering community college.

Some of the declines might be attributable to fewer students going to college after high school. Only 54% of the Class of 2020 went on to college in the year after graduating high school, down from college-going rates above 60% in recent history. However, because the remediation rate among those who went to college was down and the decline in rate was concentrated at community colleges, the numbers indicate that the new approach to remedial education instituted by the two-year college system is working.

Remedial classes are non-credit college courses covering material students should have learned in high school. A student taking a remedial class is paying for a course that won’t count toward a degree. Low-income students can use Pell grants to help pay for the courses, but that can also lead to an exhaustion of Pell eligibility before degree completion. That extra cost and delay in progress are known to lower completion rates for students assigned to remedial education. High schools have been urged to improve preparation for college-bound students, which may account for some of the improvement over time. Still, since much of the drop has been in community colleges, the success in recent years points toward innovations in policy at the two-year schools.

Alabama’s Community College System (ACCS) alternative to remediation has not only decreased the number of students being placed in remedial courses, but the colleges have also seen a rise in passage rates in their college-level math and English classes.

In 2018, The Alabama Community College System (ACCS) made system-wide changes designed to reduce the number of students enrolled in remedial courses (also known as developmental courses). Students were still assessed for their levels of academic preparation upon enrollment, but instead of being assigned to either regular or remedial courses, the system created other options. Students who needed extra support could be placed in a tutorial course alongside college-level math or English. Since the change, the number of students in remedial classes has declined, but the percentage of students passing gateway English and math has increased.

Meanwhile, the number of students assigned to remedial courses at four-year colleges has increased modestly. For years, the bulk of remedial education took place in the community college system. Now the number of students taking remedial classes is about equally divided between two and four-year schools. More students are assigned to remediation in math than in English, though the gap has narrowed as both rates have declined.

The report data from ACHE provides feedback to high schools about how prepared their graduates are. Use the tabs and arrows in the visualization to explore the data. Compare the performance of graduates from your local high school or system to other systems or schools.

This remediation data is the final dataset that looks back on students who graduated in the Spring of 2020. For that school year, PARCA previously published analyses of performance on ACT and WorkKeys, graduation and college and career readiness, and on college-going.

Progress Toward an Educational Goal

Decreasing the number of Alabama public high school graduates needing remediation in college was a goal identified in Alabama’s strategic plan for education, Plan 2020, adopted in 2012.

Remedial education is considered a waste of money for both the state and the individuals paying for higher education. Remedial courses cover material that should be learned in high school. Remedial classes cost students tuition and fees but do not produce credits that count toward graduation. By avoiding remedial courses, students can complete college work more quickly and at less cost.

Despite those efforts, scores for Alabama high school graduates on the ACT, the college-readiness test given to all students, have been flat to slightly declining. And while the number of students assigned to remediation has decreased in the two-year system, as noted, the number of remedial students has risen at four-year colleges.

Remediation is needed for students enrolling with a major gap in their readiness for college. Given the open admissions policy in the two-year system and for some four-year colleges, remedial courses continue to play a role in higher education. For others who need some help rising to the level of college coursework, it benefits students and schools to provide alternatives to remediation. The most straightforward solution is to improve preparation in high school, and those efforts should continue. The two-year system’s strategy to provide simultaneous tutoring rather than sequential remedial courses appears to benefit students, increasing passing and progression rates. The model ACCS has developed should also be explored for replication at four-year colleges.

Alabama’s College-Going Rate Down Again for Class of 2020

The college-going rate for Alabama public high school graduates declined substantially in 2020, reaching a seven-year low, more than 10% below the rate in 2014. A drop was expected considering the Covid-19 pandemic’s disruption to normal operations.

According to new data from the Alabama Commission on Higher Education (ACHE), only 54% of the Class of 2020 entered higher education in the 2020-2021 school year. That compares to 65% in 2014. The data is drawn from the National Student Clearinghouse and tracks college enrollment both in-state and out of state, at two-year and four-year public and private colleges and universities.

Since 2014, Alabama’s high school graduation rate has climbed rapidly. That’s led to a larger pool of graduates but also a growing share of individuals earning a high school diploma but not continuing on to college. In 2020, 23,369 out of the 50,514 high school graduates, or 46%, were not found to be enrolled in higher education the year following graduation.

Enrollment at four-year colleges and universities held up surprisingly well in 2020: 15,183 Class of 2020 graduates, or 30%, enrolled at a four-year school. That was despite the online classes and pandemic-related restrictions. That was down slightly in numeric terms, 193 students down from the 2019 total. It was down only slightly in percentage terms because the number of high school graduates was down as well.

The enrollment declines at the community college level have been taking place across the country. It may stem from the fact that a greater share of community college students are from economically disadvantaged households, and in 2020, the climate of economic uncertainty likely kept some from committing to embark on a college education.

ACCS officials said that because high school students didn’t finish the 2020 school year physically present at school, two-year colleges missed a traditional window for recruiting students. Applications for federal financial aid (FAFSA) were down significantly, as well. With students away from school, k-12 counselors and community college representatives were unable to make a final push for completion. The resources the FAFSA process unlocks often are a deciding factor for students as to whether they can afford to attend.

As schools return to more normal operations, it is hoped that a yearlong push for FAFSA completion and a return to traditional models of student engagement and recruitment will increase college enrollment. ACCS is also partnering with the American Institutes for Research (AIR), the Alabama State Department of Education, Alabama Possible, and ACHE on an experiment testing whether text messages can help students enroll and succeed in college. The grant-funded project aims to keep high school seniors from dropping through the cracks in the summer between high school graduation and the fall semester of that year. Participating students will receive text messages reminding them to complete specific tasks related to college admission and course registration. The data will be analyzed to measure the impact of participation.

The post-graduation trajectory of the state’s high school graduates is important. Alabama has set a goal of improving its level of educational attainment. Producing college and career-ready graduates and propelling them into advanced technical training or toward college degrees is a key priority. The labor market is increasingly demanding higher levels of training and education. Higher levels of educational attainment are associated with higher incomes, lower unemployment, better health, and longer life.

While generalizations about performance can be made, some schools are outliers. The chart below compares Alabama high schools’ college-going rate (the vertical axis) with the student body’s poverty rate (the horizontal axis). The higher a school is on the chart, the higher the percentage of students who leave high school and enter college—the farther to the right on the chart, the lower the level of poverty. The slanted line in the middle is the average of the values, which forms a line of prediction. In general, the college-going rate rises as the student body poverty rate gets lower.

The tabs above the chart allow navigation to a variety of measures of college-going and educational attainment at the school, the system, the county, and the state level. The statistics are presented in graphics, tables, and maps.