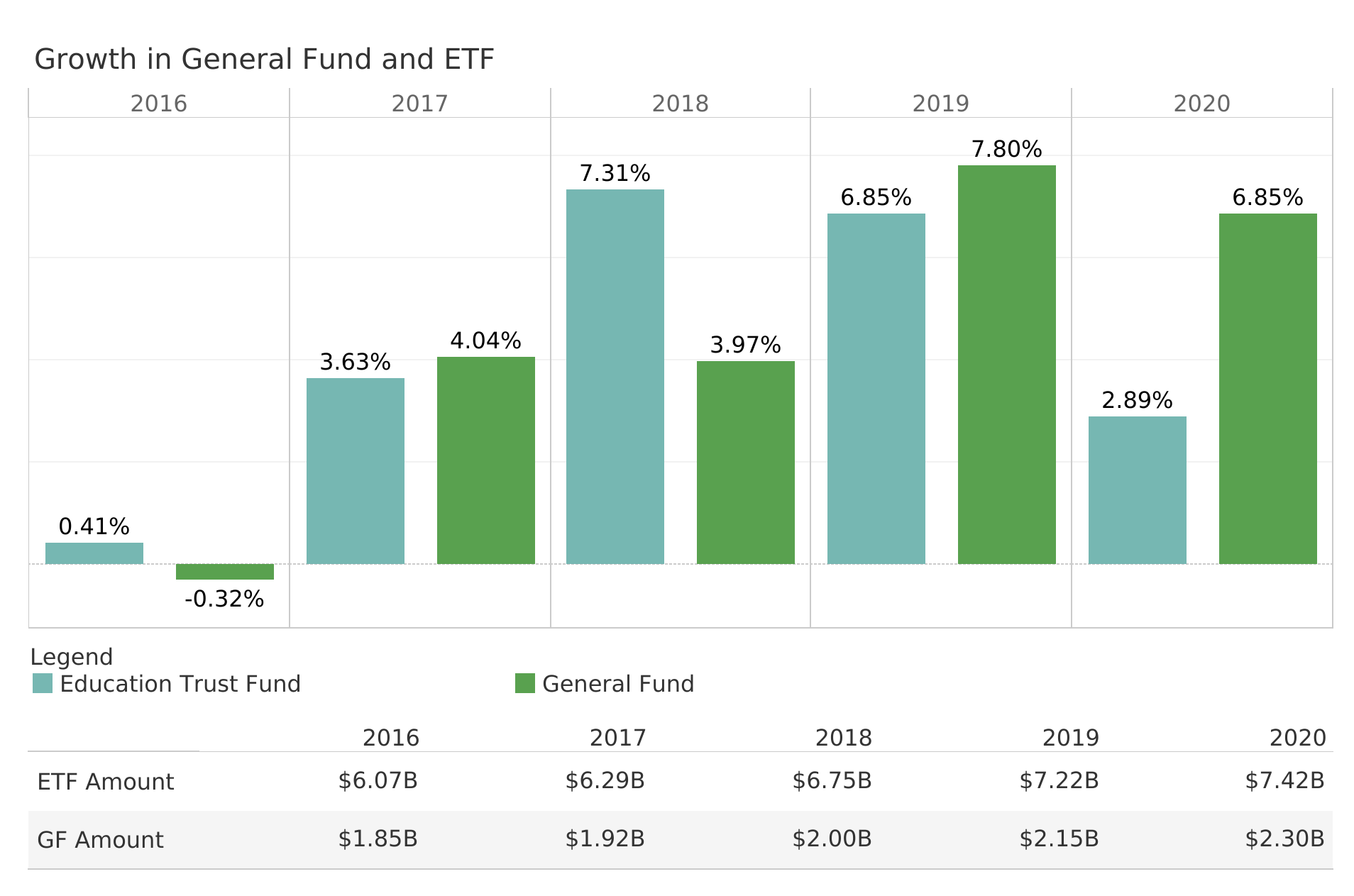 Tax revenue flowing into Alabama’s General Fund and Education Trust Fund held up surprisingly well in 2020 fiscal year in spite of the Coronavirus pandemic, thanks to an extremely strong state economy preceding the pandemic and a flood of federal aid that followed the pandemic’s arrival.

How is that possible considering the spike in unemployment that began in March and still has not completely abated? What about the mandatory business closures in March and April and the restrictions still in place to protect against the spread of the Coronavirus?

Several factors combined to dampen the blow to tax revenues.

The overall stability of the budget masks some major shifts in some revenue sources. Some of the changes were pandemic related, some not. Here are some highlights.

The General Fund is supported by a myriad of tax sources. Traditionally, most of those sources saw little in growth from year to year, and the General Fund struggled to keep up with rising expenses in non-education expenses.

However, in recent years, some growth taxes have been added to the General Fund and support for general fund agencies has become more stable.

Simplified Sellers Use Tax: Revenue from this tax on online sales nearly doubled, up $69 million to $139 million. There are two reasons. First, this is a relatively new tax, and some new retailers joined the program for the first time. So, prior to the pandemic, the tax was already up significantly. When the pandemic set in, people shifted more spending to online purchases. While this tax, a portion of which also goes to the ETF, is expected to continue to grow, it is not expected to grow at nearly this rate in the future.

Transfers and Reversions: This boost of $44 million to the General Fund was inflated by a transfer from the Revenue Department. The department transferred $22 million in fees related to drivers who didn’t have Mandatory Auto Liability Insurance.

Insurance Premium Taxes: An additional $27 million flowed in from this tax on insurance premiums. This can be the result of more policies issued or a rise in the cost of insurance. This is the largest source of revenue in the General Fund contributing $412 million in 2020.

ABC Board: With bars closed and people stuck at home, Alabamians apparently flocked to liquor stores contributing an extra $17 million to the General Fund, an increase of 14%. Most of the jump occurred in April and May, which were record months for the ABC board.

Mortgage Record Tax: An additional $12 million flowed into the General Fund from this percentage tax charged on both refinances and home purchases. Revenues from this source accelerated in the June, July, August, and September as interest rates plunged and refinancing surged. For the year, the tax was up 38% over 2019.

Interest on the Alabama Trust Fund: A 10% jump came from the proceeds off the investments in the State’s savings account, the Alabama Trust Fund. The savings account is back at full strength now since Alabama repaid its previous borrowing from the fund that occurred during the Great Recession.  That and a strong stock market helped it generate $11 million more in 2020 than it did in 2019.

Oil and Gas Production Tax: Thanks to the collapse in the oil market, this tax dropped by $13 million, down 41% from 2019.

Interest on State Deposits: The state earns interest on the cash it holds but because of dropping interest rates this source of revenue declined $11 million or 18%.

Lodging Tax: This tax on hotels and vacation rentals was down 15% for the year, collecting almost $9 million less for the General Fund. According to Finance officials, the drop would have been even more precipitous, but the Gulf Coast beaches saw a surge of business during the summer. The continued depression of convention and hotel traffic will continue to weigh on this revenue source, which is important for cities and for the state tourism agency. Hurricane Sally will also take a toll.

Court Costs: With the courts closed or severely limited in operation, the costs assessed to participants in the court system dropped by $5.4 million or 9%.

The ETF supports K-12 schools and colleges and Universities. Flowing into it are the state’s two largest revenue sources: the income tax and the sales tax.

Benefiting from growth taxes, the ETF has traditionally seen the strongest ups and downs: rapid growth in good times and jarring contractions with the economy falters. However, more recently the Legislature has spread some of the growth taxes and has imposed rules on how fast spending can grow. These restraints have thus far prevented mid-year budget cuts and have allowed the accumulation of reserve funds.

Income Tax: Income tax receipts to the Education Trust Fund totaled almost $4.7 billion in 2020, $109 million more than 2019, an increase of 2%. Pre-pandemic this tax was trending toward an astounding 7% increase.

Sales Taxes: The state received over $2 billion in sales tax revenue in 2020, $71 million more than last year was sent to the General Fund. In actuality, sales tax revenue increased 2.25%, solid growth, that didn’t fall off significantly during the pandemic. Smaller retailers did suffer during the closures, but grocery and hardware stores saw strong sales. With the enhancement unemployment compensation ended and continued uncertainty in the labor market, budget forecasters are keeping a close eye on this revenue source. However, so far, spending levels have held up. Revenues from September 2020 were 2.9% higher than in September 2019.

Simplified Sellers Use Tax: As in the General Fund, the contribution of this tax nearly doubled, bringing in an additional $23 million to the ETF. The proceeds of the tax are divided, with the ETF receiving 25% and the General Fund 75%.

Use Tax: A 14% increase in the Use Tax is not all because of growth. More than half the “increase” stems from the fact that the state had to pay a $12 million refund out of this tax source last year.

The Utility Tax: Down 3% or $13 million, this tax was lower because of lower energy use thanks to a cooler summer.

Mobile Telecom Tax: A dying tax, this tax applied to phone plans that sold talk time. For the most part, cellular plans now provide unlimited talk time at no charge but charge for data, which is not covered by this tax. Revenue continues to decline, down another $2 million or 18% lower than last year.

From the Year’s End Looking Forward

For the current fiscal year, FY 2021, Finance officials are relatively confident that revenues will more than cover the budgets. Lawmaker scaled back spending plans in light of the pandemic. As long as there aren’t additional unforeseen shocks to the economic system, the Alabama economy should generate the revenue needed to make the budgets as adopted this spring.

And if things were to falter, Alabama still has reserves to tap under extreme circumstances. Rainy Day Funds for both budgets have been repaid and additional budget stabilization funds are also available. As of now, none of those emergency measures have been employed. 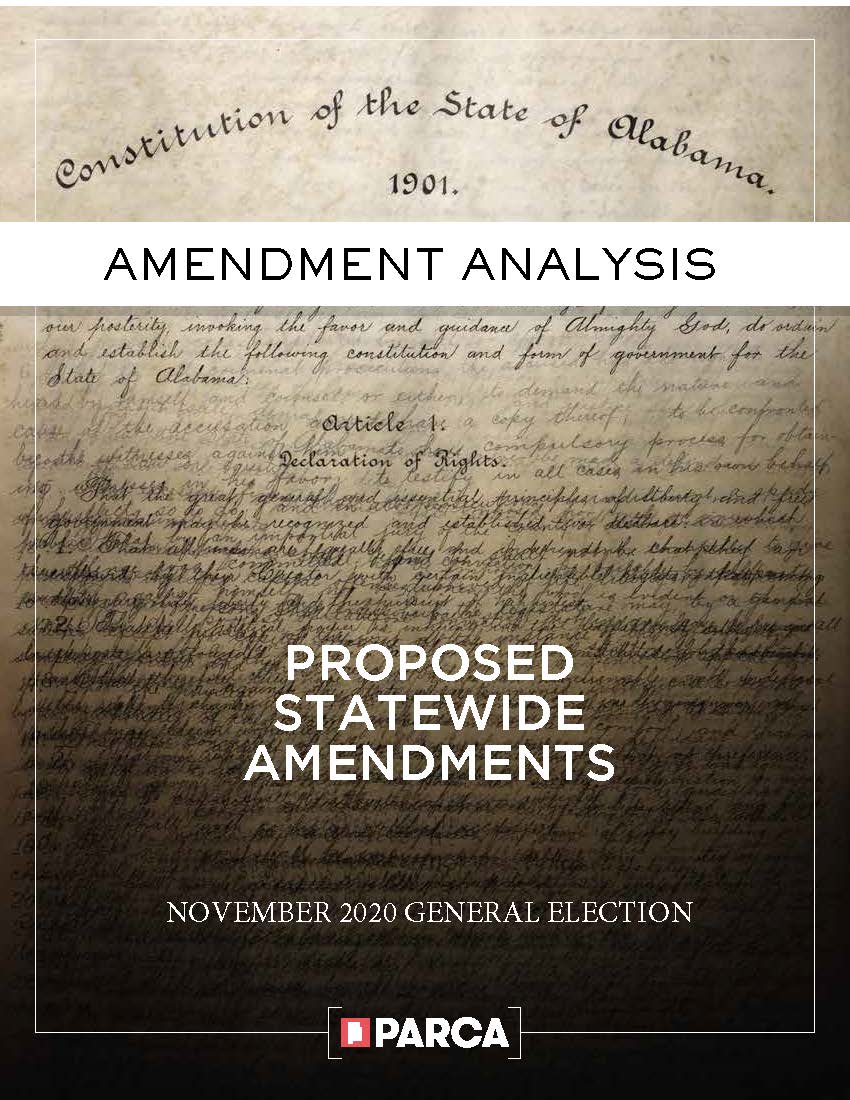 When voters go to the polls on November 3, they will not only be voting in the primary race for President, Vice-President, one U.S. Senate seat, seven U.S. House of Representatives, multiple state judicial positions, and various other state and county offices, but voters statewide will also be asked to vote on six new amendments to the Alabama Constitution of 1901. An additional 36 amendments to the state constitution will appear on the ballots of individual counties across the state.

As always, PARCA provides a high-level analysis of each statewide amendment. We study the ballot wording, but also the authorizing legislation behind the language. We do not make recommendations or endorsements, rather we seek to understand the impact of the proposed changes and the rationales for them.

Until serious reforms are made, this practice will continue, and the Alabama Constitution will continue to swell.