Children who have participated in Alabama’s First Class Pre-K program, a voluntary, public early education program are about half as likely to be involved in disciplinary problems throughout their school careers than students who didn’t participate in First Class Pre-K, and the most pronounced differences between the two groups is evident in the students’ middle and high school years, according to new analysis of discipline data.

The analysis was conducted by the First Class Pre-K Research Evaluation Team, a multi-disciplinary group of researchers that includes faculty and staff from the UAB School of Public Health, UAB School of Education, and PARCA. The Alabama Department of Early Childhood Education provides grant funding for the research in order to provide ongoing, rigorous assessment of the First Class Pre-K’s effectiveness.

The research team analyzed data provided by the Alabama State Department of Education which included disciplinary records of over 530,000 infractions for three academic years 2014-2015, 2015-2016, and 2016-2017. Data were matched with the records for all individual public school students who were enrolled over the time period. The analysis found that from the time they entered first grade, former First Class Pre-K students were less likely to be involved in the serious disciplinary violations tracked by the state records. The difference in the discipline rates of the First Class Pre-K students compared to other students actually widened in the upper grades. These results were consistent across all three years examined. For a more detailed description of the research, click here. 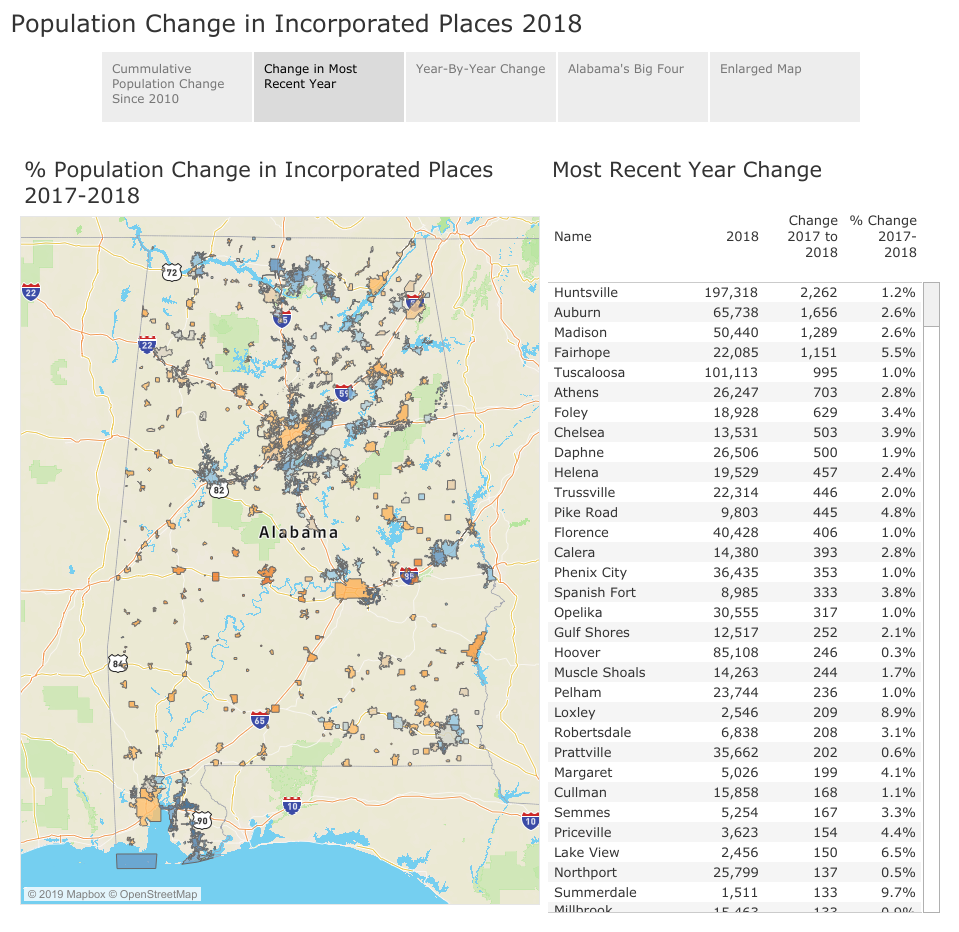 Huntsville continues its trajectory towards becoming Alabama’s largest city, while Birmingham, Montgomery, and Mobile continue to drift lower, according to the most recent city population estimates released by The Census Bureau. The two major college towns Auburn and Tuscaloosa continue to grow, as do several cities in Baldwin County.

The new estimates cover the time period between July 1, 2017, and July 1, 2018, and also look back to 2010, the year of the last official Census. Data from the same time period has already been released for state level, metro areas, and counties, and PARCA has published analyses and interactive tools exploring that data. The new cities data is below. Use zoom and drag tools to explore a particular area. Use the button in the bottom right corner if you want a full-screen display.

The city of Huntsville added more residents than any other Alabama city with an estimated 2,262 gain in 2018. If current trends continue, Huntsville (197,318) will surpass Birmingham (209,880) as Alabama’s largest city within the next several years. However, Birmingham’s metropolitan area population (1,151,801) is more than twice as large as Huntsville’s MSA (462, 693).

The Huntsville suburb of Madison ranked third in numeric gain adding 1,289. Huntsville has avoided the dilemma faced by many center cities: becoming hemmed in by and losing population to newer suburbs. In fact, Huntsville, through strategic annexation, has now completely surrounded Madison. While Madison can continue to add residents in its current footprint, it will not be able to spread out by annexing contiguous territory.

Though Madison County cities are capturing most of the North Alabama growth, nearby Athens in Limestone County appears to be receiving some of that inflow. In the farther reaches of the Huntsville orbit, Florence and Muscle Shoals had bigger gains in population in 2018 than in any year other in the decade.

In the Birmingham metro area, the core city of Birmingham was estimated to have lost over 1,000 residents between 2017 and 2018. Birmingham has bobbed up and down through the decade, but this most recent year saw the steepest decline.

However, there is population growth south and east of the core city, and the most recent estimates indicate that growth is shifting to suburbs farther south. In the most recent year, the suburbs immediately south of core city, Homewood and Mountain Brook show slight population losses, and Vestavia a slight gain. Hoover, while it did add 246 residents, is growing more slowly now than smaller cities to the south like Chelsea (+503), Helena (+457), and Calera (+393). Meanwhile, to the east of Birmingham, Trussville added 446 residents, according to the estimates.

The estimates show Montgomery losing 1,674 residents in 2018, while its emerging suburb of Pike Road gained 445. Suburbs to the north, like Prattville (+202), Millbrook (+133), and Wetumpka (+37) saw gains, but the Montgomery metro area as a whole has seen a population outflow.

Some of the population loss in the Montgomery area may be due to the strong growth being seen in Lee County, home to Auburn University. A separate Census survey tracks residential migration across county lines. A look at that data reveals that Elmore County had a net loss of 352 residents to Lee County. Nearby Tallapoosa and Macon County, which are not officially part of the Montgomery metro area, are also losing residents to Lee County.

Meanwhile, Lee County’s two larger cities have been among the state’s biggest gainers in population, according to the estimates. Auburn is second to Huntsville in numerical gain, having added an estimated 12,000 residents since 2010. Over the same period, Opelika ranks No. 10 in the state with an estimated gain of 4,000.

The 2018 estimates have the City of Mobile declining in population by 953 residents. Census estimates the city has lost about 5,000 people since 2010. Some nearby communities in Mobile County like Semmes and Saraland have gained population over the past decade, but the growth in those communities isn’t enough to offset Mobile’s population loss. One might assume that the rapid growth just across the bridge in Baldwin County is being fed by residents moving out of Mobile. However, other Census data sets indicate that isn’t necessarily the case. While there is some movement from Mobile to Baldwin County, there is also a considerable residential movement back and forth between Baldwin County to Mobile. When moves to and from the county in question are accounted for, Jefferson County had a net gain of about 500 people from Mobile County, compared to a gain for Baldwin of about 250.

Other Urban Centers and the Rest of the State

Like Auburn and Opelika, Tuscaloosa and Northport both continue to grow, though at a slower pace than the rival towns to the east. Tuscaloosa remains substantially larger than Auburn, about 100,000 vs 65,000. Opelika is larger than Northport: about 30,000 vs. 25,000.

As mentioned, Florence and Muscle Shoals showed slight growth in 2018, according to the estimates, as did Phenix City. Dothan was flat, and Anniston and Gadsden both experienced net out-migration.

A scattering of smaller towns in northeast Alabama and southeast Alabama showed population growth. However, most smaller cities in rural counties lost population. Selma was particularly hard hit, with a net loss of almost 500 people in 2018. Since 2018, Census estimates Selma’s population has declined by 2,898 dropping from around 20,000 down to 17,000, a 14 percent population decline. Small towns in Black Belt counties, cities like Tuskegee, Eufaula, and Demopolis, continue to experience population declines, but so do towns in east central and northwest Alabama like Jasper, Alexander City, and Sylacauga.