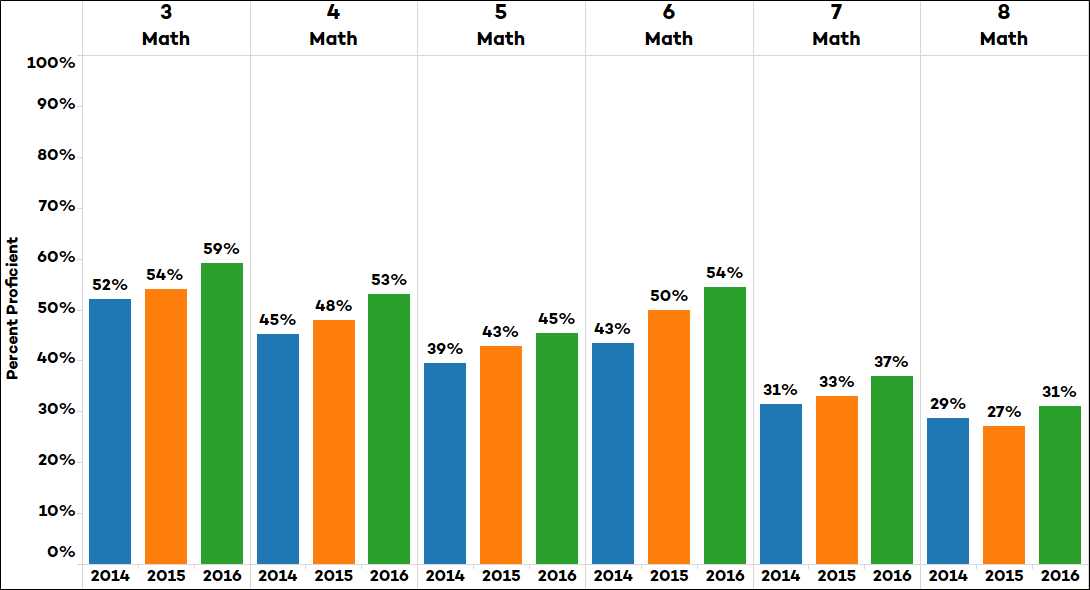 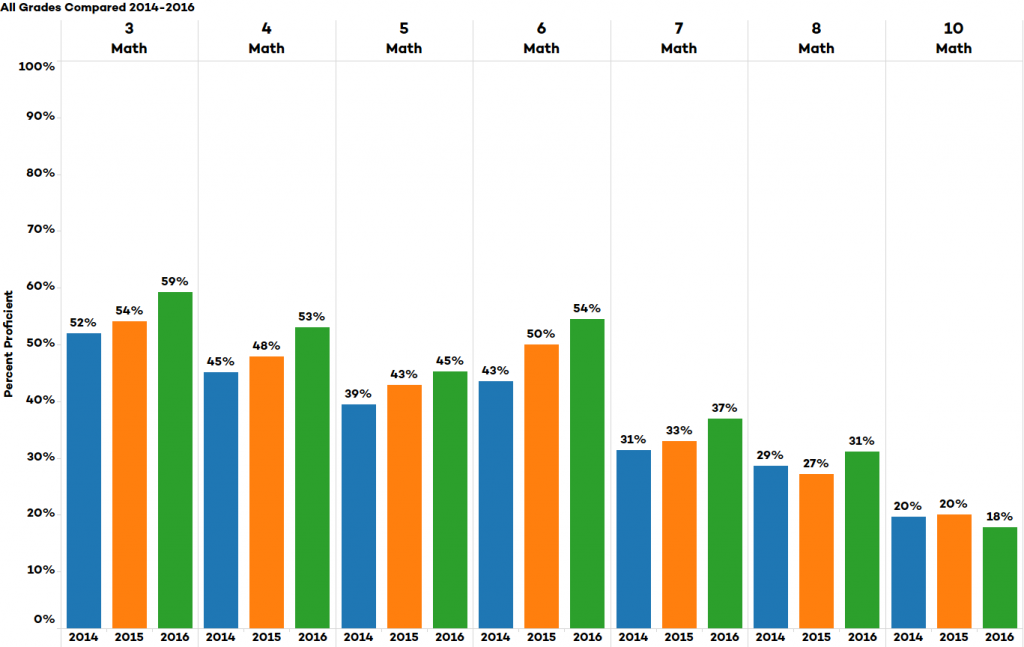 2016 ACT Results by System and School 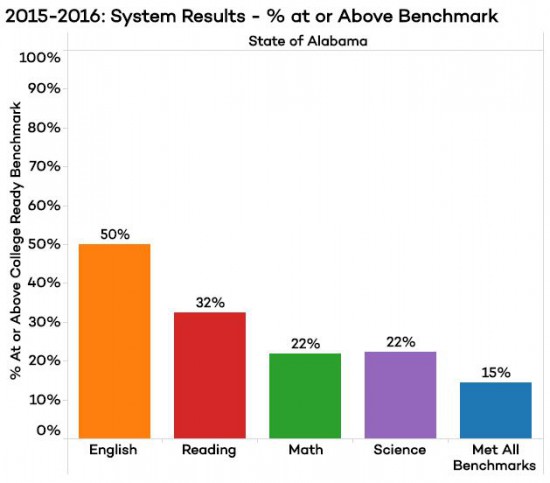 Alabama’s 2016 school and system-level results for the ACT, the widely-known test of college readiness, are now available. With the interactive charts posted below, you can explore how well your local public school system or high school is preparing students for college-level academics.

This is the second year of results for which the state of Alabama made the ACT available to all students. In the past, only students who were college bound and who paid for the test themselves took the test. Now, it is offered to all high school students who take the test in their junior year. Some take it again in their senior year. The results reflect the final performance level of students who graduated from high school.

The ACT is one of several measures that state and local schools use to determine whether their graduates are ready for college and career.

In addition to succeeding on the ACT, a student can be classified college or career ready if he or she:

The cumulative college and career readiness rate for the Class of 2016 has not been published yet. For the graduating Class of 2015, the State Department of Education reported that 68 percent of graduates met one of those definitions of career/college readiness.

On the ACT, the state counts a graduate as college ready if he or she scores at or above the college-ready benchmark in one of four subjects on the ACT: English, reading, math, or science. According to the ACT, if a student meets or beats the college-ready benchmark in a subject, that student has a 50 percent chance of making a B or better in a college-level course in that subject and a 75 percent chance of making a C or better.

One warning when exploring the data: while the data provided by the state allows comparisons between subgroups, it is, in some cases, inaccurate where the poverty and nonpoverty results are concerned. The state classifies students as falling in the poverty subgroup if they are eligible to participate in the National School Lunch Program. Traditionally, students qualified for the free or reduced school meals because their family qualified for food stamps or other poverty relief programs. Additional students from families with documented financial need could also be deemed eligible. More recently, the federal government began allowing schools and systems with a high percentage of poverty students to offer free lunches to all students. In those schools, all students are included by the state in both the poverty and nonpoverty results. A list of participating schools and systems can be found on the State Department website. Consequently, care should be taken when making performance comparisons.

What is the Budget Reform Task Force Studying?

The Alabama Legislature’s Joint Legislative Task Force on Budget Reform met for a third time this week in Montgomery continuing its search for solutions to Alabama’s perennial problems with crafting budgets.

The bipartisan panel of state senators and representatives has now met three times and each time has made sure to clarify what they are and what they aren’t doing:

They are a task force studying the state’s long-running budget problems, looking for ways to improve the process. They hope to produce a report to the Legislature by the opening of its 2017 session.

They are not a legislative committee.

They are not drafting legislation.

The assurances haven’t prevented the Task Force meetings from drawing a nervous crowd. Budgets matter. Not just to government agencies, but also to non-governmental service providers, and to individuals and businesses that pay taxes and receive services.

Budgeting in Alabama has been extremely difficult in recent years due to a seemingly intractable mismatch between the level of revenue available and the amount of money agencies say they need to maintain services.

That mismatch has left the state lurching from budget crisis to budget crisis, resulting in multiple legislative special sessions.

While the solutions reached have kept the government functioning, they haven’t solved fundamental problems. As recently published year-end results for 2016 show, state finances are still under strain. The state continues to depend on non-recurring revenues to balance the budget. When that revenue disappears, the growth of expenses is likely to continue to outpace available revenue, leading to future budget crunches.

In an attempt to further understand these long-term problems and explore possible improvements, the Task Force started with the basics.

In September, the 14-member bipartisan panel of House and Senate members heard what amounted to a Budgeting 101 presentation from the Legislative Fiscal Office. The presentation explained:

1. Why we have two budgets (the General Fund and the Education Trust Fund)

2. How our tax revenues compare to other states

3. How our budget process works

4. How it compares to other states

5. Alternative approaches to budgeting other states use

6. Revenue and expenditure challenges on the horizon

The Task Force has formed five study groups, tasked with delving into five areas of interest:

1. Unearmarking: Alabama earmarks more of its tax revenue than any other state. When a tax is earmarked, the revenue generated from a tax can only be spent for a designated purpose. This complicates the Legislature’s job when attempting to balance its budget, limiting flexibility and interfering with the Legislature’s ability to determine whether those designated dollars are needed and being well-spent. Supporters of earmarking say the practice reflects the will of the people, assuring taxpayers that money is being spent according to the people’s priorities. Others are skeptical that eliminating earmarks is worth the effort because ultimately the problem isn’t earmarking; it’s a shortage of revenue.

2. Tax Credits/Deductions/Exemptions: This study group is tasked with studying the flip side of taxes: the multitude of tax credits, deductions, and exemptions that cut into total tax collections. This often ignored side of the tax ledger is coming in for closer examination with new reporting requirements which will require an accounting of how much these credits, deductions, and exemptions are costing and what the state is getting in return.

3. The Budgeting Process: Initially, this study group was tasked with studying biennial budgeting. Alabama adopts budgets each year, which is the practice in 30 states. The other 20 states adopt budgets that run for two years, a practice called biennial budgeting. Proponents say biennial budgeting creates a better climate for planning and would allow the Legislature to perform a more meaningful review of agency operations in the years when it was not struggling to pass a budget. Critics point to the difficulties that states face in predicting revenue from year to year. They also point to the fact that in biennial states, budgets are often revisited in the off-years, negating the expected gains in time and effort the biennial budgeting theoretically creates. At the Task Force’s November meeting, the chairman of this study group, Rep. Kyle South (R-Fayette), said his study group will not only study biennial budgeting but will also examine Alabama’s process for crafting budgets in a more general sense.

4. Agency review: This study group is seeking information from agencies to further clarify the financial position of state agencies. Because some agencies receive earmarked taxes and federal funding, legislators aren’t always clear on how budget cuts will affect an agency. At the November meeting, Phil Williams, (R-Gadsden), the study group’s chairman, presented preliminary information his office had gathered from state agencies. The agencies were asked to provide the total amount of federal funding received and the amount each agency had in reserve at the end of the budget year.

5. Tax Relief: This study group is tackling the question of whether Alabama’s current tax structure is fair, equitable, and well-designed to encourage the economic prosperity of citizens and businesses.

As the study groups generate information, PARCA will be exploring these issues as well.

At the Task Force’s October meeting, the panel heard presentations from the current chairmen of the House and Senate Budget committees about the problems they face in crafting budgets. While all welcomed the Task Force’s attention to budget matters, a good deal of skepticism was expressed about some of the approaches under review. Earmarking creates problems, the budget panel chairs acknowledged, but they expressed doubt that reform of earmarking would provide a significant change to the bottom line or would be politically feasible. While there was interest in the concept of biennial budgeting, some questioned whether, in practice, a shift to such a system would yield better results. All expressed interest in having better information on which to base budgeting decisions. They encouraged sustained attention by the Legislature and leadership from the governor’s office toward improving the budget process.

There is a lot of money at stake. In round numbers, Alabama government dispenses about $30 billion a year: about $12 billion from state sources and $18 billion from federal and other funds.