Alabama public high schools produced more graduates in 2014 than they produced the previous year, and more of them enrolled in Alabama public two-year and four-year colleges and universities, according to the latest High School Feedback report from the Alabama Commission on Higher Education (ACHE).

However, a slightly higher percentage of those entering freshman, 32.1 percent, had to take remedial courses in English or math to prepare them for college-level work, according to the ACHE report. (To explore results for schools and systems scroll to the bottom of the page). Plan 2020, the state’s strategic plan for educational improvement, calls for increasing the high school graduation rate and decreasing the need for those graduates to enroll in remedial courses. 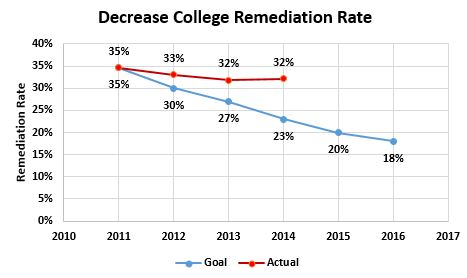 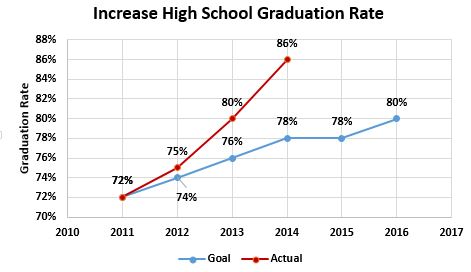 The report also gathers data on how many of the entering freshmen required remedial courses in college. These are courses designed to bring entering freshman up to the level of competency required to perform at the college level.

Ideally, all students graduating from high school and enrolling in college would be prepared by their high school to be college-ready.

Students who need remediation are taking courses that don’t count toward college completion. Remedial courses are a cost to the students, who are paying for non-credit courses, and a cost to colleges and universities that provide the courses.

The latest report from ACHE tracked students who graduated from high school and enrolled in college in 2014.

Before getting too deep in the details of the data, it is important to note some limitations.

And the remediation rate calculated for any high school only applies to the graduates of that high school who enrolled in an Alabama public higher education institution.

As a final caveat, there is not a common definition across Alabama public higher education institutions for who qualifies for remediation. At some schools, the bar may be higher; at some, it might be lower.

In 2014, 51 percent of graduates went on to a public two-year or four-year college in Alabama, the same percentage as the year before.


From 2013 to 2014, state employment edged up slightly with a net increase of 140 employees across all departments, yielding a final total of 30,611 employees. The state employed 35,534 in 2008, before the financial crisis and the years of budget cutting that followed.

The biggest employment declines came in Mental Health (down by 1,593 employees). Much of that decline can be attributed to the closing of three mental health institutions in the state, Partlow, Greil, and Searcy. Bryce Hospital in Tuscaloosa was replaced by a new hospital and its patient capacity was lowered from 350 to 268. To make up for lost capacity in mental hospitals, the state shifted funding to community-based care operations. The moves were designed to provide care closer to home and family.

The State Health Department also saw a substantial decline in employees. The largest reason for the drop in employment was due to a transfer of a program serving to the elderly and the disabled to the Office of Senior Services. The Department of Senior Services restructured the program with those home care services now being administered by local Area Agencies on Aging. Those agencies, in turn, contract with home health services companies to provide the services to recipients.

A state hiring freeze was in effect for much of the period between 2008-2014, so when employees retired or left for other jobs those positions went unfilled. Some employment changes in various departments reflect other program transfers and consolidations.