The big count with major consequences for Alabama continues, and it looks like it will come down to a very tight margin.

The decennial census for 2020, the official count of people living in the United States, is expected to be released in February. But in the meantime, in December, the Census Bureau released its annual population estimates for the states. According to those estimates, as of July 1, 2020, Alabama’s population would be just high enough to keep its current seven representatives in the U.S. House. In that scenario, New York would lose a seat.

However, the estimates don’t count; the Census does. And it is the population as of April 1 that matters when calculating each state’s proportional representation in Congress.

How will the count and estimates differ, particularly considering that the count (and the estimates’ calculations) took place in the time of a pandemic, with all the disruptions, delays, and difficulties that accompanied it?

And not only that. This Census count took place in a fog of unprecedented controversy over who the Census is supposed to count and how it might be used to determine apportionment. Judging by the estimates, Alabama and New York are the two states closest to the line for losing or gaining a seat.

Using those figures in an apportionment calculator created by the University of Michigan’s Institute for Social Research, Alabama would maintain its seventh Congressional seat, but only by a margin of 6,210 residents. Under that scenario, the state of New York, which is losing population, would lose 2 Congressional seats. According to the estimates, New York suffered a net loss of 126,355 residents between July 1, 2019, and July 1, 2020.

Where did the two states stand three months earlier, on April 1? And how closely will the count correspond to the estimates? The count is supposed to tally the population before a spike in deaths in New York caused by Covid-19 and before an exodus from the city due to the extreme outbreak there. If by April 1, Alabama had not achieved its needed net gain in population, or if New York’s population hadn’t seen its big drop, the tables might turn. New York might lose just one seat, and Alabama might lose one.

Looking Back Over the Decade

Looking back over a decade, the estimates had Alabama growing moderately throughout the decade, with stronger growth relative to other states in the most recent years. In percentage growth, Alabama’s growth ranked 26 among the 50 states in 2020.

In terms of numeric change, Mississippi was estimated to have lost a net total of 1,343 residents between 2010 and 2020, while Louisiana, Arkansas, Kentucky, and Alabama gained between 100 and 150,000. Meanwhile, South Carolina and Tennessee each added over 500,000 residents; Georgia and North Carolina over 1 million and Florida, almost 3 million.

The South Region, as the Census defines it, was the fastest-growing region in the U.S. Beyond the Southeastern states, the Census South Region includes growth hotspots Texas, Virginia, D.C., and Maryland. It also includes West Virginia, which lost population at a faster rate, 4%, than any other state. Illinois suffered the greatest net loss in population, 244,042, over the course of the decade. 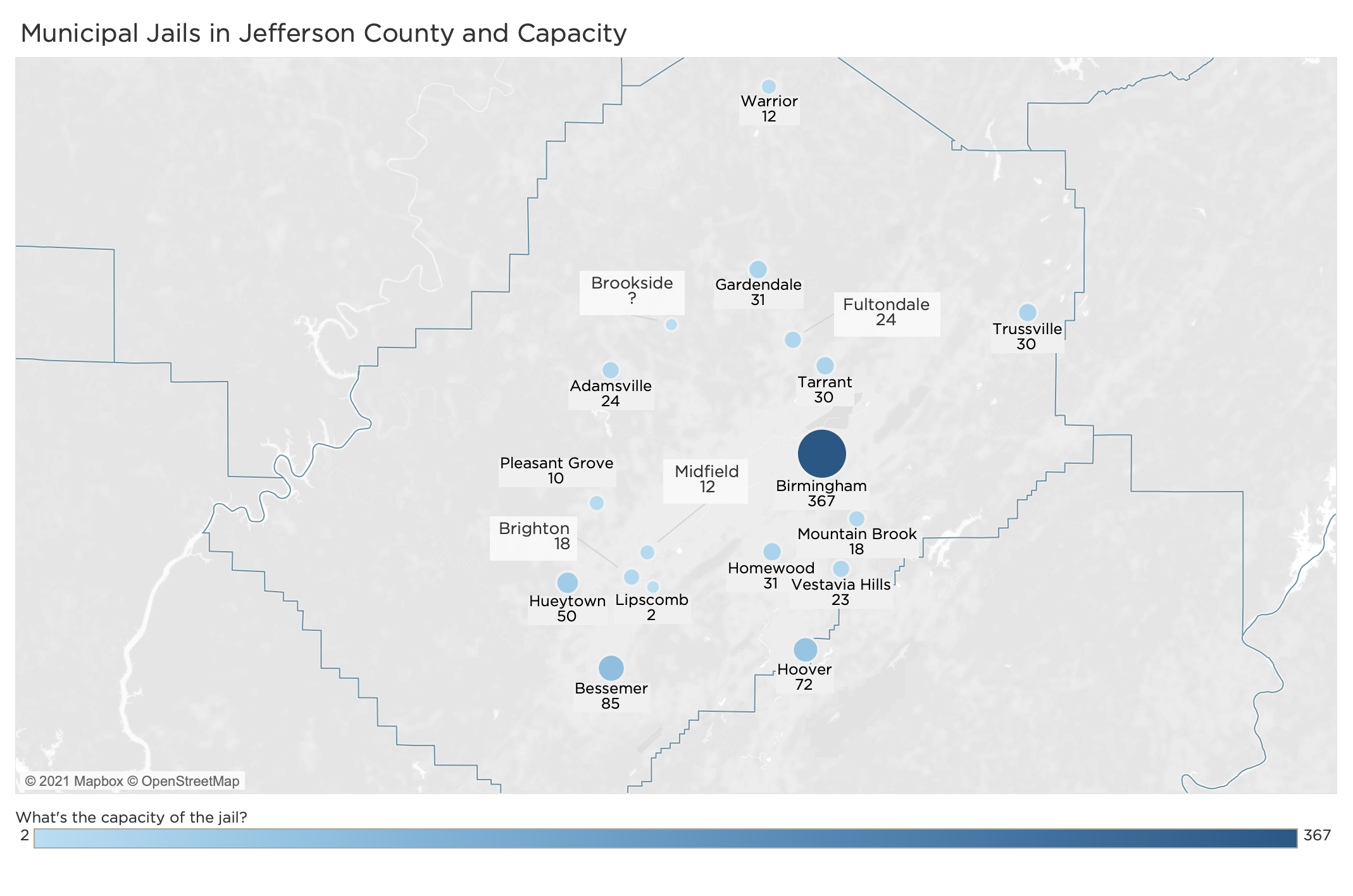 Taking population into consideration, Jefferson County may have more jails than any other major county in the U.S., and the county’s mayors are investigating options for decreasing the liability, expense, and inefficiency that comes with operating so many separate facilities.

As part of ongoing regional cooperation efforts, the Jefferson County Mayors Association commissioned a new study jointly funded by the Association and the Community Foundation of Greater Birmingham. The resulting report, authored by the Public Affairs Research Association of Alabama, examines the capacity, occupancy, and age of Jefferson County’s 18 jails and identifies short-term and long-term options for decreasing the number of jails through cooperation between cities and the county.

The report finds that Jefferson County’s 18 municipal jails have a combined capacity that far exceeds the diminished number of municipal inmates typically held in them, a situation that predates the Coronavirus pandemic.

Several jail facilities including Bessemer, Birmingham, and Jefferson County’s downtown Birmingham jail, are aging and in need of serious repair or replacement.

Several factors are driving cities to reconsider operating jails. The cost of providing medical or mental health care to inmates can be high. Prisoner lawsuits and potential injuries to employees create a liability risk for cities. Municipal courts are now less likely to keep prisoners in jail, driving down occupancy and driving up per prisoner costs.

At both the national and state level, there is a trend toward shared jail facilities between cities and between cities and counties. Across the U.S., most jails are operated at the county level; 80 percent of jails are operated by county sheriffs. Most large cities in Alabama, including Huntsville, Mobile, Tuscaloosa, Auburn, Florence, and Decatur, now contract with the county sheriff for holding inmates. Several Jefferson County cities have closed their jails and contract with neighboring cities to hold prisoners. Other cities contract with Jefferson County Sheriff’s Office for both patrol and jail services.

The development of the report and discussions of the findings have launched conversations between mayors and county officials about the options, discussions that expected to continue in 2021.

As a long-term solution, Jefferson County Sheriff Mark Pettway has expressed interest in constructing and operating a metro jail capable of housing inmates from interested municipalities.

However, that proposal is years away from being considered. Jefferson County is still recovering from bankruptcy and will not be in a position to provide financial backing until 2024. Depending on the location, a new facility could necessitate the construction of both a new jail and courthouse. Such an expensive project would require a broad array of support from county commissioners, judges, law enforcement, the district attorney and the defense bar. And, for the project to provide substantial savings for the community at large, municipal participation, particularly from the city of Birmingham would be crucial.

In the shorter-term, cities can collaborate through contract. Police officials in Birmingham say they are willing to house prisoners from other jurisdictions, using the revenue to renovate operate the Birmingham jail. Police officials in Hueytown and Adamsville also have excess capacity and are have expressed willingness to provide jail space to neighboring jurisdictions. Trussville and Warrior already are hosting inmates from neighboring cities.

In the long-term, political leaders in Birmingham and other cities are interested in getting out of the jail business. But in order to do that, an agreement would need to be struck either with the sheriff and Jefferson County or with a coalition of cities coming together to form a regional authority to construct and operate a shared jail.