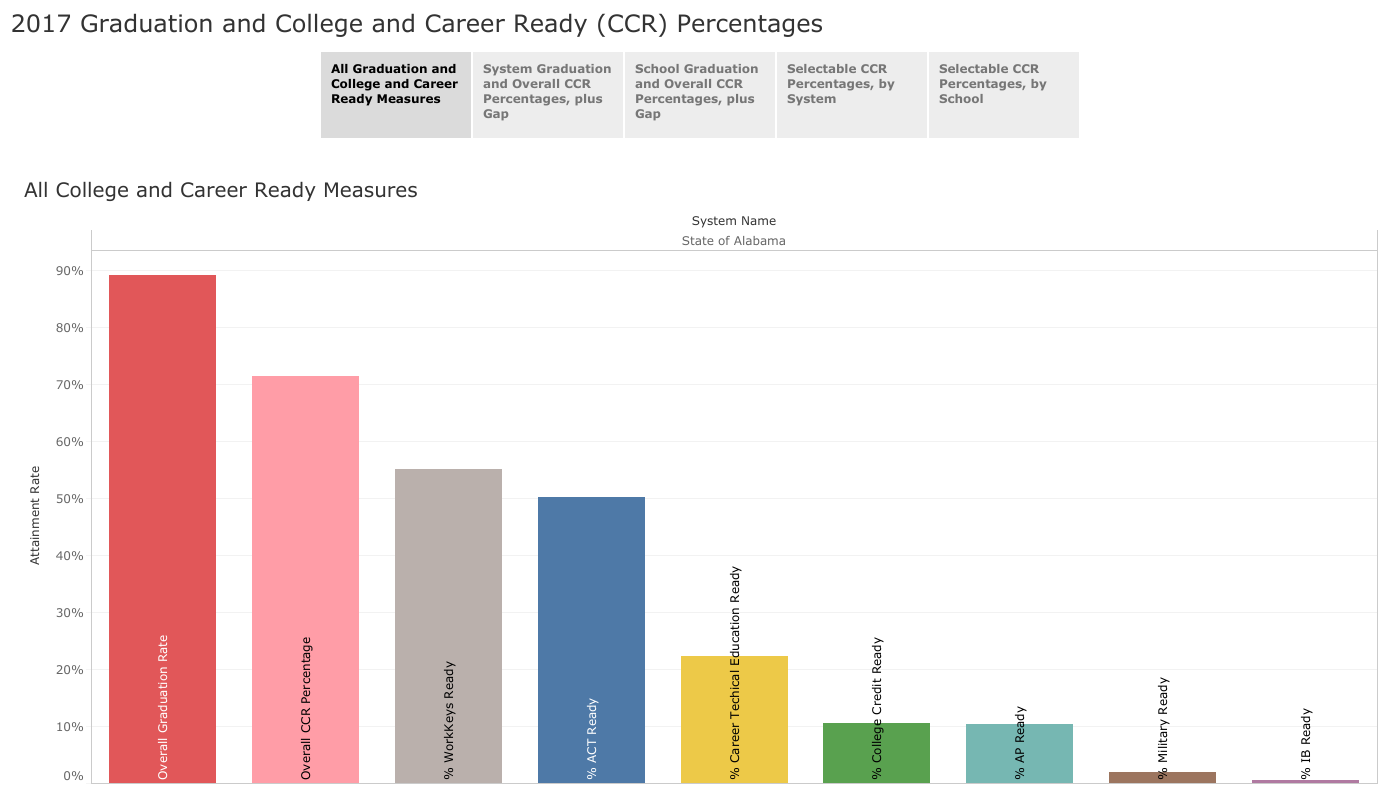 In this graduation season, we take a look back at some encouraging educational statistics for last year’s graduating class, the Class of 2017.

For the seniors in the Class of 2017, 89 percent graduated with a diploma, but only 71 percent of seniors earned the college and career ready designation.

The statewide results for the ACT and WorkKeys assessments also both showed improvement for the Class of 2017.

The ACT is the widely used assessment test designed to measure college readiness. The test is given to all 11th graders in Alabama’s public schools. WorkKeys is a separate test, also developed by the ACT organization, designed to measure workforce readiness. The test, given to all 12-grade students annually, measures students’ skills on the math and reading skills as they might be applied in the workplace.

The interactive chart below allows users to explore the graduation and college and career readiness percentages for high school seniors in 2017 at the state level and by school system, and high school. When comparing results on individual measures, bear in mind that some schools and systems vary on which route to college and career readiness they emphasize. Some may invest heavily in providing AP classes or preparation for the ACT while others concentrate on dual enrollment or career technical education.

As Alabama’s graduation rate has soared, so has the concern that some students who are receiving high school diplomas haven’t been adequately prepared for the next step after high school.

In March, then-State Superintendent Ed Richardson pointed out the disparity between Alabama’s high school graduation rate (87 percent in 2016) with the Class of 2016’s College and Career Readiness rate (66 percent). Richardson called the 21-percentage point gap between the graduation rate and the career readiness rate “unacceptable.”

“Some schools have a gap approaching 60 percentage points,” Richardson noted. “In fact, a few high schools only have one in four graduates who accomplish one of the six College- and Career-Ready Standards.”

The final tallies for the Class of 2017 showed that the gap between high school graduation and college and career readiness narrowed to 18 percentage points.

Richardson declared the gap between graduation and college and career readiness one of the “most serious issues facing our schools.”

“Failure to address this issue immediately,” Richardson said, “will only result in more high school graduates and their families being led to believe they are ready for the next step in their lives when they are not—harm public education and depress our state’s economic growth.”

For those students who plan to continue at a four-year college, the ACT is designed to measure their readiness for college.

In 2017, 18 percent of high school seniors met or exceeded the benchmark score in all four subjects tested, English, Reading (Social Studies), Math, and Science. That’s up from 17 percent in 2015, according to the most recent data provided by the Alabama State Department of Education.

ACT scores are most commonly reported as scale scores, a number on a 36-point scale (a 36 in a perfect score)

The average scale score on the ACT for Alabama was 19.2 in 2017, up from 19 in 2015. While Alabama trails the national average scale score of 21, it is important to keep in mind that Alabama is one of 18 states in which 100 percent of public school students take the test. The state pays for one administration of the test for students in their junior year.  In most other states, only those applying for college take the test. Students can take the test multiple times. Their best score is the one counted in the statistics.

On the WorkKeys assessment, 64 percent of graduates in 2017 earned a Silver certification or higher, the level needed to be considered college or career ready by the state. That’s up from 61 percent in 2016.

The Priorities of Alabama Voters 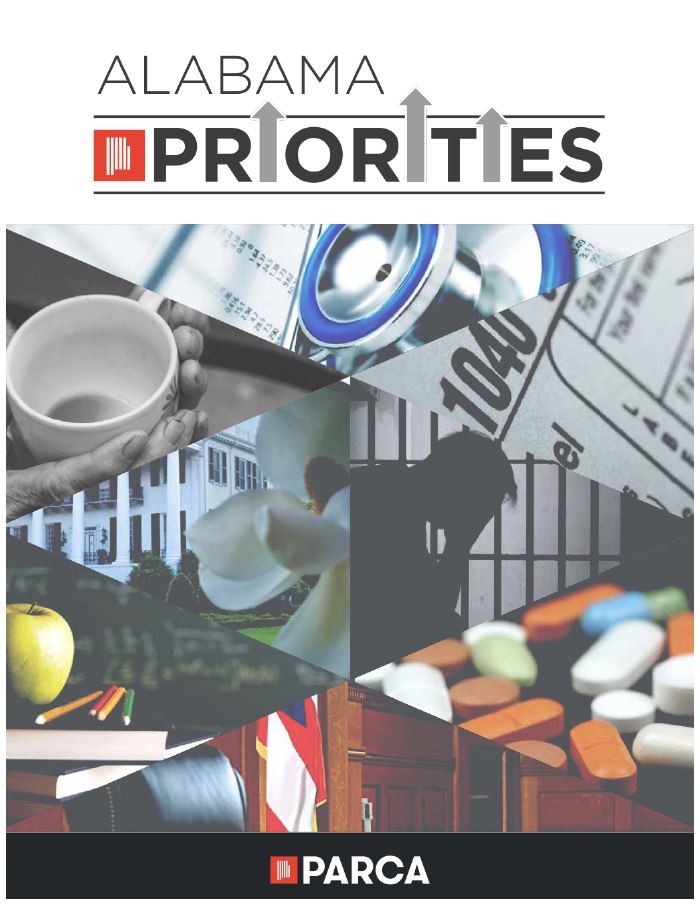 In 2018, Alabamians will elect a governor and five other statewide executive branch officers, 140 legislators, and scores of local officials. Those elected will lead Alabama for the next four years. These leaders should be responsive to the concerns of those they represent but also willing to help citizens understand critical, but perhaps less obvious, public policy issues. Such leadership requires understanding what issues most concern voters and what issues voters may not fully appreciate.

In this election year, PARCA surveyed Alabama voters to determine their thoughts about the general direction of the state and the issues that most concern them. We found broad agreement on the critical issues facing the state. Based on voter response, PARCA identified and ranked voters’ top 10 critical issues. Alabama Priorities explores this issue.

Alabama voters are eager to see improvement in K – 12 education, with 70% indicating they are very concerned about the state’s education system. Voters are worried about healthcare , particularly access and cost. With the recent resignations of a Governor, a Speaker of the House, and a state Supreme Court Justice, it should come as no surprise that voters are concerned about corruption and ethics. For many voters, mental health and substance abuse are not just theoretical problems—56% of Alabamians indicate they are very concerned about the issue. The poor and homeless have not been forgotten.

These issues, along with jobs and the economy, crime and public safety, job training and work force development, the state’s image, and tax reform comprise the top 10 list of Alabama’s priorities.

Perhaps this list should not come as a surprise. Previous polling by PARCA and other organizations have found similar results.

What is perhaps more surprising, however, is the extent to which these are shared priorities. We found few significant differences between Republicans and Democrats, liberals and conservatives, blacks and whites, or other groups. While differences exist, Alabama voters are not polarized.

At the same time, while the data suggests broad agreement among voters, there is an area where significant gaps exist. PARCA surveyed business, civic, and nonprofit leaders, journalists, and academics. The differences between the priorities of these experts and voters were noticeable.

Four top 10 issues for voters fell outside the top 10 for experts:

Conversely, experts identified four issues that did not register high on voters’ list of concerns:

Possible explanations as to why some issues are more important to voters and others more important to experts are offered in the “Differences Between Experts and Voters” section of the report. three implications are suggested.

This research suggests that elected officials and candidates have an opportunity to show leadership and to build broad coalitions to address Alabama’s most pressing challenges.